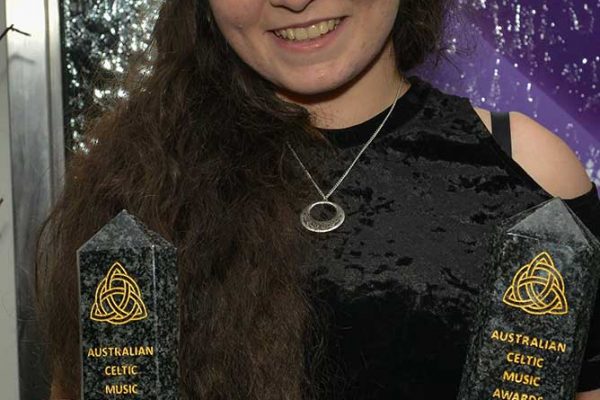 The Australian Celtic Music Awards evening is held each May during the Australian Celtic Music Festival weekend. This year (2017) Siobhan was nominated in many categories and was delighted to win the “Female Artist of the Year” and for her “Entwined” album producers, Ben Heneghan and Ian Lawson, to receive the award for “Producers of the Year”. She was also a finalist in the “Best Celtic Album” (for “Entwined”), and “Best Celtic Song” (for both “The Parting Glass” and “Dance of the Leaves”). 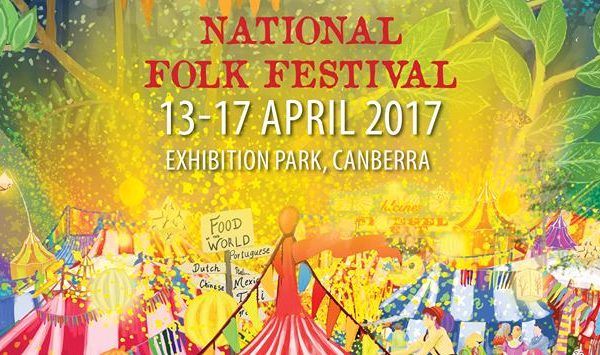 Siobhan spent the Easter weekend performing at the National Folk Festival in Canberra. After being invited to perform at the festival launch a couple of months previously, she was delighted to be asked to perfom in the Opening Concert in the Budawang (biggest venue of the festival). She also performed solo concerts at the Budawang, Trocadero and The Lyric – all really good venues.

Here is a sketch of Siobhan performing at the festival by talented artist Janet Hayes. 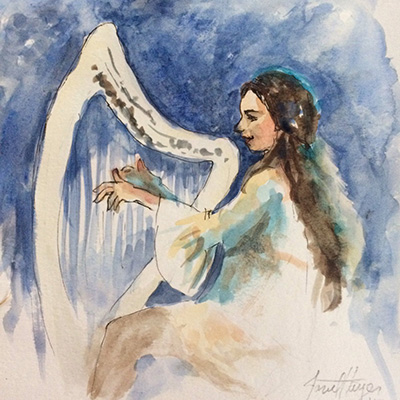 The festival was very successful for Siobhan. She had almost full houses, standing ovations and fantastic CD sales. She was also mentioned in a poem written by Rowan McKeon.

Whoosh! What was that…went by…
Walking out by Lyric, Scrumpy and Majestic
Another Thursday Opening Concert ringing
In my ears. I’m home again! Or did I ever…
Leave? The only clue’s the whoosh!
The year made as it flashed away behind
Leaving me with its expiring expectations,
Jaded judgements fading fast as the Muse
Picks me up with her rhythms and her rhymes
And lifts my spirit ‘loft to float
In the safety of the harmony vibrating here.
Still, it takes a while to let go
The ties that hold me down.
White male poets reciting dead men’s words, again.
Strummed guitars, and those white males, again.
But then Siobhan entwines a silver thread
Around my heart… and pulls…
Jane lays waste to all my expectations.
David rocks me off my seat with words.
And Lenno lifts me to Olympian heights
Where ancient muses seek out my soul,
Tragedy holds hands with farce,
Draws me through some mountain pass
To aargh! An ambush! A woman’s heart
And other body parts…
Waiting, to catch this white male mounting
His Anglo Celtic platform yet again
To cheering crowds his hat to doff
It’s Sandy, and she’s knocked my socks right off.